From the moment news was received that an Earthquake had struck Armenia, ARS had set its network of relief efforts in motion.Over the next couple of days, the Armenian Relief Society will be publishing stories and reports that will highlight the complete account of ARS’s earthquake relief activities. As we mark the 30th Anniversary of the earthquake and remember the victims and the survivors, the ARS pledges to continue to actively partake in the advancement of the Shirak Province and play a pivotal role in the nation and state-building of the homeland. 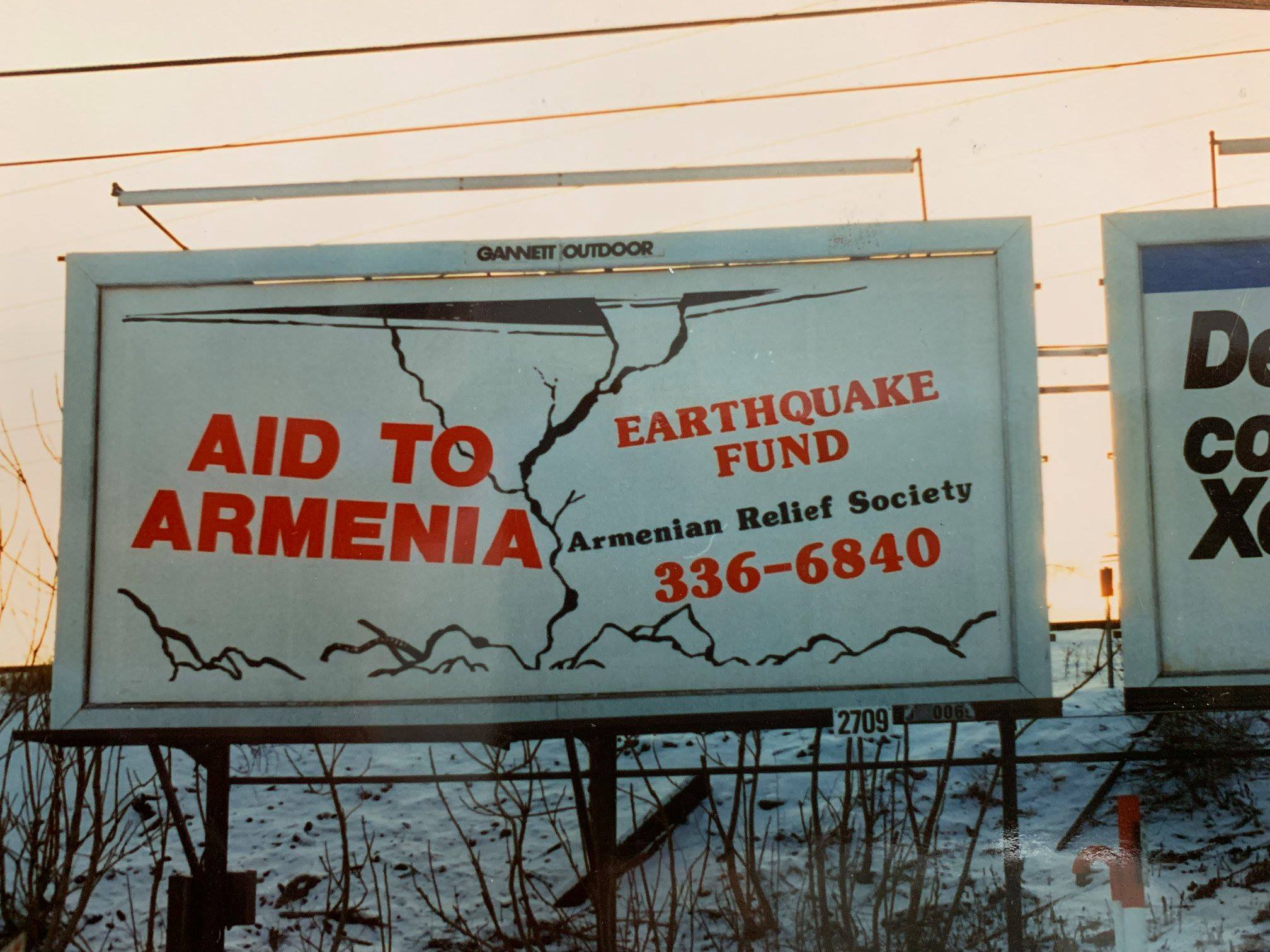 As soon as the news was received that an earthquake had struck Armenia, the ARS had set its network of relief efforts in motion. Within hours of the December 7, 1988 disaster in Armenia, ARS earthquake relief efforts we’re already underway. This report serves to present the scope of this relief network, the commitment of the 16,000 ARS members worldwide to rebuild it devastated Armenia.

To ensure that effectiveness of its earthquake relief operations, the ARS Central Executive initially established contact with the Soviet Embassy in Washington, the United States Office of Foreign Disaster Assistance,  the US State Department, the American Red Cross Office of International Assistance and other organizational volunteer organizations involved in similar activities.

The ARS CE drew its plan of action in the crucial initial stages following the earthquake, with three primary objectives.

Second, to provide healthcare for casualties – those suffering from traumatic injuries, crush syndrome malnutrition and etc. And finally to strive toward the restoration of pre-disaster conditions with special attention given to the return of displaced persons to their homes by focusing attention on reconstruction and rehabilitation projects.

On the morning of December 8, the aRS had already mobilized worldwide network of volunteers to coordinate earthquake relief activities. Concurrently, the ARS-CE began a worldwide effort to response to maximize relief for Armenia. ARS chapters and members were encouraged to participate in the relief and fundraising activities in those regions where community coalitions were formed. Daily contact was maintained worldwide to coordinate relief activities and to provide the latest news from Armenia as it came in from our established contacts within the disaster area. The ARS Washington office also served as an information center to non-Armenian groups and interested community organizations.

In an effort to provide comfort to Armenians living in the diaspora who are desperate for news of their relatives in Armenia, the ARS set up telephone banks in 11 countries with the intent of gathering and releasing information on individuals and families who survived the earthquake. Information on how to get access to the telephone banks were continually broadcast in Armenian by special arrangement with the Armenian service of the Voice of America.

Four days after the earthquake, the ARS became aware of the alarming shortage of dialysis equipment in Armenia. Together with the Baxter Health Care Corporation, the ARS had managed to airlift 36,000 kilograms of dialysis equipment and supplies on December 18, along with a team of four physicians and technicians. The team returned home on December 31, having provided 20 to 35 dialysis treatments on a daily basis. A second team was sent to Armenia on January 7 and spend 16 days providing 18 to 25 dialysis treatments each day, and also trained local personnel in how to provide the dialysis treatments, to continue the team’s good work long after the team had gone home.

During the first week following the earthquake, the rescue operations in Armenia were in enhansed by the ARS’s sponsorship of a team of trauma physicians to work in Armenia, flown in a Chrysler corporate jet. The team was drawn from a volunteer bank that had been registered with the ARS. Also $14,500 worth of equipment had been rushed to Armenia to be used in the search and rescue operations in the affected villages. Meanwhile, an agreement had been reached with both the Chrysler Corporation and Monsanto Chemical Corp. that all employee contributions would be matched by corporate funds.

On December 28, the ARS proposed it’s a long-term earthquake relief program to just Soviet Ambassador in Washington. The program delineated the areas of ARS participation in the reconstruction of Armenia, the provision of psychiatric assistance to earthquake survivors, the establishment of health care clinics in teams of medical specialists to do work with local physicians, and the organization of a Volunteer Corps that would enable Armenians in the Diaspora to be put to effective use in the earthquake  recovery program on an ongoing basis.

In December, as well, the ARS together with the Armenian General Benevolent Union (AGBU) and the Armenian Missionary Association of America (AMAA) agreed to coordinate relief and reconstruction efforts. Joint memoranda were issued to all Armenian groups providing specific instructions on the most-needed items in Armenia and packing labeling specifications.

The ARS made a concerted effort to negotiate with the US State Department and the Soviet Embassy to add the nutritional food transportation to the humanitarian aid airlifts provided by the US Department of Defense. From December to February a total of 13 airlifts were successful in providing 300 tons of donated goods (food, clothing, medical supplies), collected mainly by the ARS and AGBU, to those in the disaster area. By special arrangement with the AGBU, all the relief goods were co-signed to Bishop Karekin Nersissian, Vicar of the Araratyan Diocese in Yerevan, for distribution to earthquake survivors.

On January 26, an ARS leadership team, headed by the chairperson of the ARS-CE, left for Armenia to observe the effectiveness of the state to meet the needs of the people. Through meetings with high-level government officials and visit to hospitals in Moscow and Armenia, the ARS developed the bases of the programs to be adopted for earthquake relief.

Particularly in regard to health care, the ARS delegation observed that while the scarcity of medical equipment and supplies is prevalent throughout the country, what is more alarming is the lack of standardization in healthcare facilities. There were in enormous differences among hospitals in terms of the quality of healthcare, the distribution of medical equipment and supplies (including relief aid), and appearance. It was also observed that what would be most beneficial would be to arrange a program where medical staff in Armenia would be brought to the west to be trained to better provide for the needs of earthquake victims.

As the program for reconstruction was being prepared, the ARS team learned the Armenian health ministries need to develop a database to monitor the needs of those persons affected by the earthquake. Since Armenia was technologically unable to meet the task of such large scale, long-term, population-based service, the ARS, in cooperation with the John Hopkins University, proposed to adopt the project. The proposal was immediately approved and $189,000 was allotted for its commencement. It’s objectives were:

4 – to establish a training program for the workers needed to implement the project 5 – and to use the information gathered to divine the needs of the affected persons, and hence to provide for those needs.

To ensure the success of this “data-based” project, the ARS reached a contractual agreement with an international organization with great experience in such affairs, Volunteers and Technical Assistance (VITA). To launch this partnership, the ARS of North America and VITA co-sponsored a benefit concert featuring Maestro Mstislav Rostropovich (his first performance in five years). With the help of VITA, the preliminary equipment for the establishment of a cold-cut factory in Spitak was delivered in the spring of 1990. In July, 1990, three people were trained, in Kansas, to manage the plant. So far, the ARS has spent $59,000 on this project.

In March, 1989, the ARS arranged for two physicians to visit Armenia and trained doctors there in the field of cardiovascular treatment. They were Dr. Vladimir Kvetan, the head of Emergency Medicine at New York’s Montefiore Medical Center and Dr. Valerie Baystock, also of the Montefiore Medical Center. They worked closely with the best arterial specialists in Armenia.

In April 1990, the ARS-CE, completed the construction of a technologically advanced emergency medical unit in the Republican hospital; two Armenian doctors were trained at the Montefiore Medical Center, in conjunction with this project as well. The entire project cost was $30,000.

The ARS has also obtained, at no cost, free medical equipment and training. The only cost incurred for this project has been $4,000 for transportation.

From August 30 to September 12, 1989, a team of psychiatrists were sponsored to travel to Armenia to assess the long term effects of the earthquake on the Armenian population, and to establish a program of mutual exchange of knowledge, training, and relevant assistance. In the meantime, the ARS contributed $30,000 to the Armenian Research Foundation for their technical assistance project, which would provide for the establishment of computer systems in Armenia, and the training of personnel needed to operate such systems.

In August 1990, a group of 25 volunteers were sponsored to help in the reconstruction efforts of Kedk village in the Akhourian province. Participants came from the United States and South America, and cost $13,000 to the ARS-CE of which the respective Regional Executive shared the expenses.

The ARS-CE adopted two new programs for the 1990-91 fiscal years.

The ARS is helping communities in Armenia to build fully equipped community centers, and has allotted $200,000 for this project.

The ARS-CE has organized the reconstruction of villages in Armenia and Artsakh vulnerable to destruction, especially those in the border regions. $100,000 has been allocated to this project, although the ARS-CE recognizes that this is insufficient, that much more funds need to be raised, and that the project will take an extensive amount of time to show signs of success.