Over the entire four years of the Artsakh liberation war, when the orphaned, often homeless children of more than 7,000 martyred freedom fighters and countless civilian casualties were in dire need of immediate assistance from state-run and private humanitarian organizations, the ARS, steeled with its decades-long experience in benevolent activity, as always, at this historic hour was there to assist. 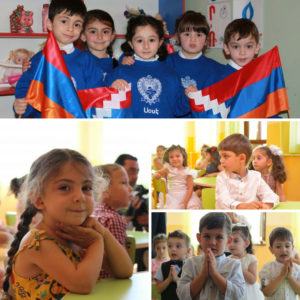 In 1998, at the close of the armed conflict and the beginning of the reconstruction years, the Artsakh Ministry of Education offered the ARS a war-damaged building in Stepenakert to repair and use as a refuge for needy families and children left homeless by the ravages of war. In April of the same year, in that half-renovated building, the ARS “Soseh” Kindergarten opened its doors to 87 three to six-year-old children, laying the foundations of the future Artsakh-wide network of ARS “Soseh” Kindergartens. Today, the Armenian Relief Society has 8 “Soseh” Kindergartens across Artsakh -- in Stepanakert, Shoushi, Togh, Metz Tagher, Ashan, Akanaberd, Qaregah, and Khndzristan. Since 1998, over 2,300 children have enjoyed the warmth and nurturing care of these kindergartens. Soon, “Soseh” kindergartens started operating in Bulgaria in the cities of Sofia, Plovdiv, Varna, Burgas and Rousseh.

In 2015, during the highest meeting of the organization, the assembly voted to undertake the project to renovate the Stepanakert Kindergarten. In just two years, the ARS was able to renovate it to a two-story building equipped with modern and became witness to their hard work’s fruition. The school also features a bunker that will serve as a shelter in the event of bombings to shield children from danger.

To date, the ARS has allocated over $5 Million to the “Soseh” kindergarten program.

Seventeen years later, the ARS “Soseh” kindergartens remain a positive presence in the lives of Artsakh’s children and their families. These kindergartens instill not only the basics of an Armenian education during these children’s earliest formative years, they also provide them safe, lively and caring surroundings, nurturing and preparing them for a healthy and productive future.

ARS Chapters operate one-day schools across the world to give an opportunity to students to learn Armenian. The curriculum covers an array of topics, from language and history to heritage and culture. ARS Saturday school alumni emerge as leaders who are able to make vital connections to their culture, education, identity, and future endeavors. As they learn to read, write, and speak Armenian, the curriculum offers music and dance classes. Students may also participate in cultural programs, regional educational activities, contests, and quiz bowls.

Please contact your local ARS to find out where you can find ARS Saturday Schools.

The ARS established the “Outstanding Student” Program in 1995 to award the best students  in Armenia. Award recipients are jointly selected by the Government of Armenia’s Ministry of Education and a special committee appointed by the ARS Armenia Regional Executive Board.

Every student selected by the Outstanding Student Program receives a monetary award of One Hundred US Dollars.

In an effort to encourage the use of the Armenian language, the ARS hosts an Armenian Essay Writing and History contest in Javakhk and encourages the youth to enhance their skills in creative writing and preserving their language and identity.