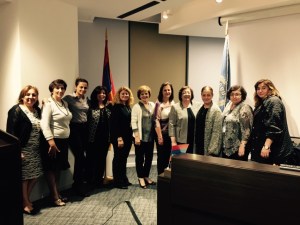 The 71st International Convention of the Armenian Relief Society (ARS) convened from Sunday, October 4, 2015, until Friday, October 9, 2015 in Yerevan, Armenia. During the six days, the convention considered the ARS Central Executive Board’s activities for the past four years, evaluated the activities, and adopted special programs. Along with educational, health, social and assistance programs for the needy, the convention paid particular attention and adopted corresponding resolutions for the following: the crisis in the Middle East; standing in solidarity with our compatriots in Armenia, Artsakh and Javakhk; providing care packages to soldiers; helping border villages with their various issues; the financial hardships facing the ARS Armenian Blue Cross in Greece; and the immediate needs of the other Armenian communities.